China Daily: Light up the Way, Bridge Two NationsTo CMEC Builders in Pakistan Located in the Indus Plain on the South Asian subcontinent, Pakistan is a nation with a long history and a profound culture where power supply ran short for many years and even failed to meet the needs of people’s everyday life and the country’s economic growth. It was against such a backdrop that China Machinery Engineering Corporation (CMEC) got into Pakistan’s power project contracting market thirty years ago. Since then, CMEC has endeavored to bring about exciting changes on this ancient land, despite all the challenges. With power plants built and put into operation one after another, CMEC has brought tangible benefits to local people and made its due contribution to the development of the country’s power industry.Over the past three decades, CMEC builders have been sent in groups to Pakistan. There, they have worked hard with no complaint and notched up one success after another. The first came in 1983 when they delivered the 210MW fuel-fired Generating Unit 4 for the Guddu power plant. Following projects include the 210MW fuel/gas-fired Units 2, 3, & 4 for the Jamshoro power plant completed in 1991, the 2×210MW fuel/gas-fired Units 5 & 6 for the Muzaffargarh power plant completed in 1995, the 320MW fuel/gas-fired Unit 4 for the Muzaffargarh power plant completed at the end of 1997, the gate & hydraulic hoist equipment for the 5×300MW Ghazi-Barotha hydropower plant completed in 2002, the 3000KW hydropower plant completed in 2004, the turnkey project of the 225MW Saif combined-cycle power plant completed in 2010, and the NEELUM-JHELUM hydropower plant under construction.The 210MW fuel-fired Unit 4 of the Guddu power plant represents China’s debut in the international thermal power market and the first international engineering project China has contracted and built based on export seller’s credit. Top Chinese enterprises formed the most competitive project team and it took the team nearly three years to complete the project, 22 days ahead of schedule. Through the project, CMEC made a successful shift from an industrial and trade company to an outstanding players in China’s international project contracting sector.The Saif combined-cycle power plant, whose contract was signed in May 2007, is the world’s first power plant with a dual-fuel 6FA gas turbine unit. With the joint efforts of the entire project team, no major equipment quality or safety related accidents happened from the debugging stage to the end of the warranty period; the unit maintained stable operation and passed the stability test successfully. The final completion certificate was awarded in December 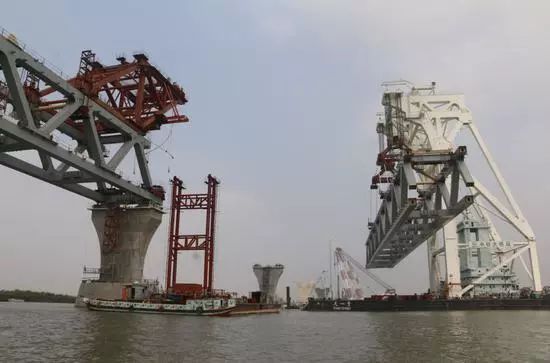 The core part of the Padma Bridge over the Padma River in Bangladesh is being built by China Railway Major Bridge Engineering Group Co Ltd on Feb 21, 2019.

It has already finished testing an earthquake alert system for high-speed trains, and the system is expected to be extended to the country''''''''s entire high-speed rail network, said Zheng Guoguang, vice-minister of emergency management. He made the remarks ahead of the International Day for Disaster Reduction, which falls on Saturday this year.

The early warning system, known as the National Seismic Intensity Rapid Reporting and Early Warning project, was approved by central authorities early last year. It will include more than 15,000 observation stations across the country, at a cost of almost 1.9 billion yuan ($274 million), and 3,3200 service terminals in national and provincial government bodies that are related to earthquake relief, as well as in public institutions and vital infrastructure and utilities, such as nuclear power plants.

China Railway Major Bridge Engineering Group Co Ltd, or MBEC, one of the country's biggest bridge makers, said its business overseas is expected to exceed the domestic market in the future, while focusing further on updating building quality through innovations with smart technology.

Observation stations will be set in different areas according to earthquake frequency and the potential risk of and effects from disasters. The North-South Seismic Belt, which encircles most of Sichuan, Gansu and Yunnan provinces, will be one of the key areas for such stations, said Zheng, who also is head of the China Earthquake Administration.

Liu Ziming, chairman of MBEC and a deputy to the 13th National People's Congress, said the group's overseas projects now account for almost 10 percent of its revenue and the ratio is expected to continue rising.

Seismic sensors could detect the first energy that emerges from a quake before the jolt begins. This makes it possible to warn those in affected areas before they feel the impact. The farther people are from the epicenter, the longer they would have to respond in the event of a quake.

The company, which is currently engaged in 10 construction projects outside China, conducts its overseas business in three ways: independent projects, contracting projects with other Chinese companies, and contract projects with overseas companies.